I am still adjusting to the fact that ECB meetings aren’t always on Thursday any more…so a somewhat late offering in terms of my views ahead of the press conference this afternoon.

So can Draghi restrain himself, or will he be smiling from ear to ear and patting himself on the back? He has some justification to be happy with how things have evolved over the past six weeks. I think that is largely down to (lucky) timing, in that the EZ was actually showing some small positive growth signs back late last year. That said, the big easing programme into that (small) cyclical upturn has no doubt provided more of a fillip to confidence, has helped to boost asset prices and weaken the euro. All of which should help to turn around the inflation outlook and reduce the risk of inflation expectations de-anchoring to the downside. Of course, it would have been better if the ECB could have agreed to pursue this route over a year ago, but here we are.

Looking in a bit more detail at the key developments over recent weeks:

1) Activity indicators have surprised on the upside

IP growth has picked up and retail sales remain solid

The more timely PMI surveys have also shown further improvement, to be back to 2014 recovery highs: 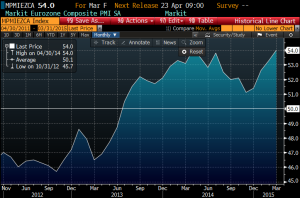 The ECB bank lending survey also showed a further increase in demand for loans by businesses, and banks expected to ease credit conditions further over the coming months.

As is well reported, eurostoxx has really taken off since January: 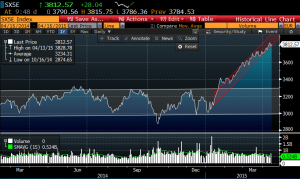 Govt bond yields have continued to fall across the EZ, with German 10y at a remarkable 0.13% and peripheral spreads (Italy in the chart below) still near their lows (despite worries about Grexit – aside: is there really enough contagion risk priced here??). 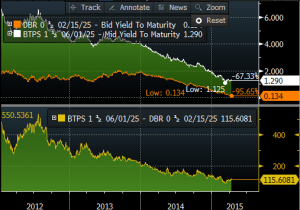 And the euro has chopped around a bit, but remains near the recent lows, with the effective exchange rate at the lows: 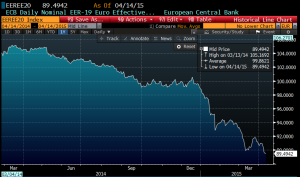 3) Inflation has more or less come out as expected, but importantly both market and survey measures of inflation expectations have stabilised (with the former well off its lows of earlier this year).

For those who think that the ECB has been so successful that they need to talk about tapering QE earlier than Sept next year, you can forget about Draghi going down that route today. You don’t destroy the foundations of a recovery just as it starts to show itself – particularly one that is likely to be as fragile and uneven as the EZ is likely to experience.

Draghi’s job today is to keep the momentum up, both in the economy and in financial markets. A bit of self congratulation won’t hurt.

Trades: I am short the euro and long European consumer discretionary stocks. I don’t see any reason to change going into the press conference today.

One thought on “ECB: can Draghi restrain himself?”