Following on from the recent review of my red list of macro themes (here), this post looks back at how my favourite trade ideas have performed over the past 3 months. Overall, the trades have worked pretty well. All of them are in the money, some more so than others.

The trades I have had listed for the past 3 months are:

I have written a fairly extensive review of this trade (here), which I closed in mid-May. Here is a chart of how the trade performed:

The trade worked nicely, but I became worried post-May BoE Inflation Report. However, I am getting keen to get back into this trade, with levels looking pretty attractive again.

This one has been tough to hold through the draw-down of nearly 4%, but it has been worth holding for a current gain of 2.3%. I remain confident that this trade still has legs, with something south of 75c in the not-too-distant future.

Having done nothing much for over two months, this one has finally come to life again and is now well in the money, up 3.7%. 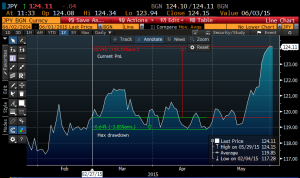 Japanese equities have been one of the best performing this year (alongside European). This trade is currently up 10%, with no material drawdowns. 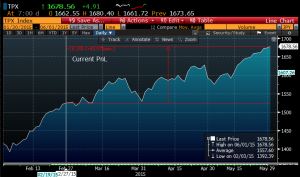 This was a QE-related trade that I hoped would outperform eurostoxx (just as the equivalent index had done in the US during QE). Unfortunately both have more or less gone sideways, with a lot of vol. But it currently the consumer discretionary index is outperforming by around 2%.

This trade has been disappointing, with most of the action before the end of February. It is in the money (just), but it would have been much better to just be short 30y Treasuries (currently up around 20bp since end-Feb).

I had recommended this at end-Feb, but called time on it at the end of April as it rallied. That looked like a fantastic decision as everyone got stopped out in May, but the euro is now pretty much back to the same level (indeed slightly lower) than when I got out.