If you are interested in the likely outcome of the UK general election on 7 May, then I can’t recommend highly enough the team at www.electionforecast.co.uk They are working with the US statistician Nate Silver (http://fivethirtyeight.com/) who is now widely regarded as the best at interpreting US election polls (and indeed all things statistical). The UK team update their probabilities daily, based on new information from polls, and combine it with a range of historical data. Here are their latest calculations: 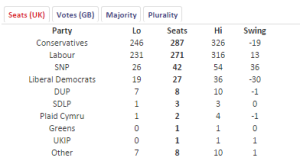 Remembering that in the UK you need at least 326 seats to govern, you can see that we are likely in for a big mess if things don’t change much over the course of the next month. The likely coalitions currently show none having enough seats to get over the line (broad Cons coalition gets closes):

Labour and the SNP have said that they won’t enter into a formal coalition (although they could obviously change their minds on this). But the SNP have said they would support Labour in a minority govt. But that still wouldn’t be enough by itself to get Labour over the line (313) unless the Lib Dems also support them in a minority govt. Bottom line: unless either the Conservatives or Labour have a strong finish into 7 May, it is going to be messy. A few other points: