The BoE’s first “super Thursday” has come and gone, with most of the commentary since suggesting it wasn’t quite so super after all. But I actually thought there was a lot of important messages from the press conference and supporting materials. I will go through my key takeaways below, but I thought it was first worth reflecting upon the market reaction across the afternoon.

At noon the new monthly statement, minutes and Inflation Report were published. The immediate reaction was to the 8-1 vote. The market had been expecting at least 7-2, and so there was an immediate sharp rally in short sterling and sell-off in the currency. By the time the press conference was over at 1.45pm the rates move had almost completely reversed (the NY open saw a ED rally which muddied things a little) and sterling ended down only around 0.4%. This was a classic example of misunderstanding what the vote outcome meant for the policy outlook. No doubt if the vote had been 5-4 or even 6-3 that short sterling should have sold off, but in my view any other vote was little in terms of new information, as became evident in the press conference. So super Thursday injected a bit of intra-day volatility that wouldn’t have occurred under the old regime (as I had expected here).

“The second is that the forecast of the MPC, which takes into account of developments, does not deliver a sustainable return of inflation to target. It brings inflation back to target in two years, but it then overshoots; the economy then moves into excess demand. And so a judgement that has to be made…how would one adjust policy in order to have policy slightly tighter than where the market is? Which can be an adjustment in terms of timing of the start of rate increases or the cumulative amount of rate increases. And those are judgments that we’ll make.”

“…what it says is that in the Committee’s best collective judgement that the market curve does not deliver a sustainable return of inflation to target, because there is an overshoot; the economy moves into excess demand.”

These comments make clear to me that the MPC remain on track to raise Bank Rate, sooner than they had expected in May, and arguably sooner than the market currently expects. Or a further steepening in the curve would be necessary.

So while the growth and inflation forecasts, as well as the rhetoric were broadly in line with the expectations in my preview (here), the question for me is whether November is still on the table for a first hike? One factor that makes me think it has slipped to below 50% probability is that the MPC kept their downside skews to both growth and inflation, reflecting uncertainty about the pass-through of the stronger exchange rate. This was the key risk I had identified to my call on the timing of first hike. Had they removed the downside skew, I would have been more confident in sticking with November. But, on balance, I think February is now more likely.

That still provides good opportunities to be short the front end in my opinion.

As outlined above, inflation is now expected to remain below target for longer than in May, before rising up to 2% within two years, and then slightly overshooting. The pick-up in inflation reflects the reducing impact of lower energy prices and higher sterling (which add around 1.5% to headline inflation) and the steady reduction in the output gap (which starts at around 0.5%, but is eliminated over the coming year as growth is expected to exceed potential) leading to stronger wage growth and unit labour costs.

The chart below shows the inflation probabilities relative to target, with the overshoot in year 3. 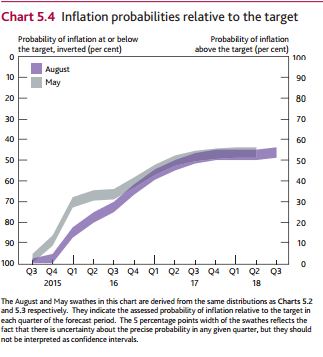 In terms of the growth news, the table below neatly shows the upside surprises across the demand components, with only exports disappointing.

While on the supply-side, the surprise has been on somewhat weaker labour market quantities, the flip-side being stronger than expected productivity growth. More importantly, the upside news in weekly earnings, both including and excluding bonuses is key. If we see further upside in the coming couple of months, then a November hike may get more traction. 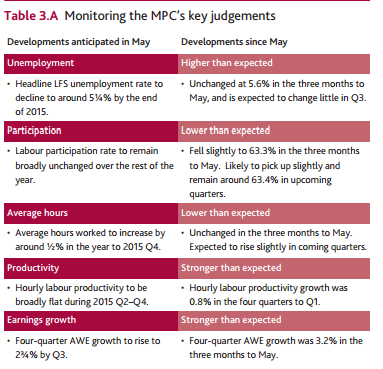 The IR notes that earnings growth has begun to move more in line with survey indicators, perhaps reflecting an unwind of compositional effects that had been holding it down (this was well telegraphed by the MPC) and increased labour market churn.

But that will need to translate into stronger unit labour cost growth (ie not simply reflecting stronger productivity) in order to get the MPC ready to hike. 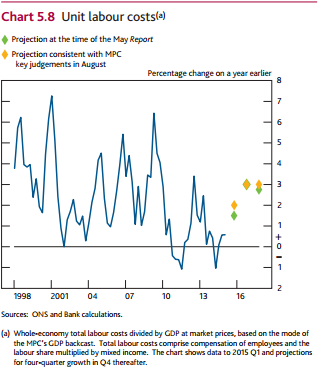 The MPC highlight four key risks to their outlook:

I have talked about (3) above, but (4) is going to be just as important. The IR has two interesting charts that speak to it:

The first shows the impact of the exchange rate on import prices. It is significant, and therefore an important determinant of CPI inflation. What has been surprising though is the apparent reduced pass-through from the most recent appreciation. This has led the MPC to reduce the impact going forward as well. They have hedged this bet by maintaining the downside skew in inflation, but it is likely to be central to the debate over the coming months.

The second shows an estimate of domestically generated inflation. This is an attempt to measure the pace of ‘underlying’ inflation, and see if that reflects what you would expect given the view on slack. The average remains low, and while the Bank describe it as stable, you could argue that it has picked up a bit over the past year. It currently sits at 1.4%, somewhat above traditional core measures of CPI.

Finally, there was a rather sharp exchange between Carney and one of the journalists regarding his recent speech, where he said that the decision to raise rates would come into sharper relief around the turn of the year. The accusation made against him was that message was contradicted by the August MPC decision. Carney refuted the suggestion, saying:

He went on to say at the end of the press conference:

“Look, as the economy progresses, and if the economy progresses broadly in line with this forecast, the decision about when to move interest rates is going to come into sharper relief – that’s the way it works. And there were some big changes between May and August. But as I said in my opening remarks – as a whole, in the judgement of the Committee, we’re moving closer to the point at which the first interest rate increase may happen.”